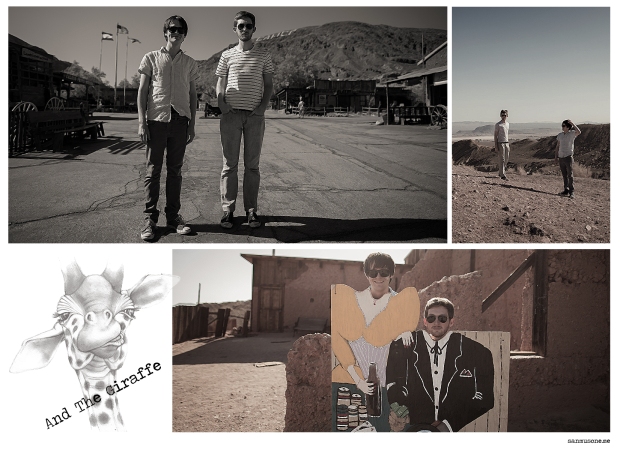 Following the previous post about “the out of this world music”- “And The Giraffe” fits in perfectly! I know I use the word ‘love’ a lot, but I only post what I love, so sorry for not coming up with something more creative – love – says it all… and I love their music=)

The band  “And the Giraffe” was started by two friends (Nick Roberts and Josh Morris) coming together in an University of Florida. The journey was not easy though as the beginning of the band was operated through Dropbox. Despite the distance and time obstacles, the two guys released their debut  EP, Something for Someone in 2011. In 2012 they welcomed in two more members (Robert Edmondson on bass and Malcolm Martin on drums) and released the band’s second EP, Creature Collector.

“The goal of the album (Creature Collector) was to explore a different sonic space. Our last record was done piece by piece and kind of stitched together, whereas this time around we took the time to try and nail down all of the arrangements of the songs so that we could record them live. We also wanted to take our time with production to explore all possible avenues. A lot of times we just played around with tones or stumbled onto ideas and sounds and ran with them,” says Roberts.

Now all members of the band are done with college and are permanently back together, preparing to release a new album in year 2014. That is super great news, because after all the songs I have heard, I definitely want more and am looking forward very excited what will come next from them.

Basically all of their songs are very mellow, sweet to the ear and dreamy. They put you at ease, make you relax and actually help you enjoy life and world around you much more even if you had a bad day…it’s like they put a spell on you! But a good one and I am super thankful for that spell, it’s very often needed to shut down the stress mechanism and brain in general. I also love that they keep the same style and if you liked one song, you’ll like them all, staying in that peaceful mode. So guys – you are fantastic! Please don’t stop the music coming=)

And here’s few of the treats – enjoy!

One thought on “And the Giraffe….”