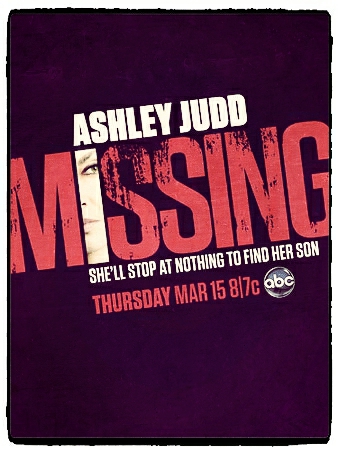 Truly excited presenting this new Tv Show that came out recently=) With very few good movies or Tv Shows coming out for quite a while now, first Touch was giving me hope that the TV industry is not completely lost and now one more great discovery!

Missing with Ashley Judd is new Tv Show that came out March 15th.

Ashley Judd  stars as Becca Winstone, a former CIA agent-turned-florist who gets back in the game when her son (Nick Eversman) disappears while studying abroad in Italy. (Sean Bean co-stars as Becca’s husband Paul)

I started watching the show with no previous reading about it so I expected it to be more drama wise where ashley will be either sad wife missing someone or a police worker searching for people…basically I expected something already seen many ties before and quite boring. To my surprise it was nothing like that! The action started from very beginning, then the surprise about a florist kicking ass of a guy with a gun and the surprises just kept continuing through out the episode as well as the action!

Check it out yourself and do your own judgement=)

You can watch it either on ABC network page or HERE.

P.S for all of you who will think Ashley looks different, here’s the truth behind it=)

2 thoughts on “Missing, with Ashley Judd…”